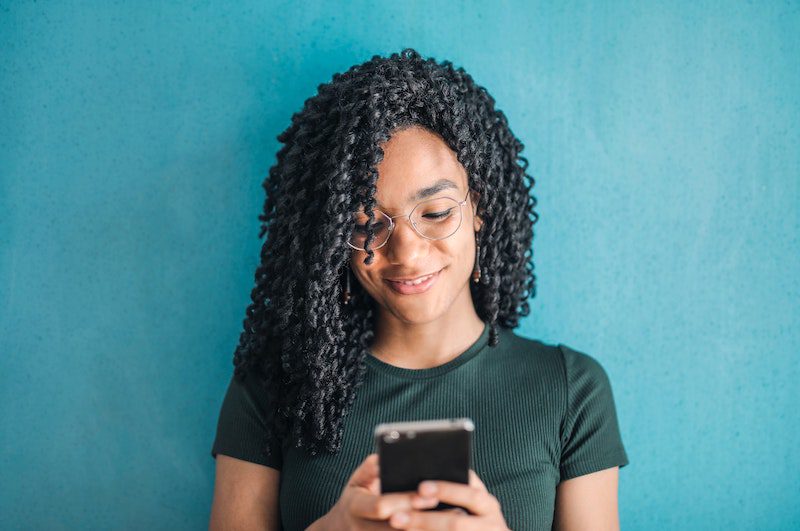 What is Native Advertising?

Native advertising is the use of paid ads that align with the look and aesthetic of the website on which they appear. This is what makes native ads difficult to pick out. They blend in extremely well with the organic content on the page, which is also what makes them so effective. Consumers are able to ignore ads these days. In fact, it’s more likely that you will survive a plane crash or win the lottery than click on a banner ad, according to one study. However, there are some native ad platforms, such as Yahoo Gemini, that offer a good user experience and have many targeting options. There are several different ways you can use native ads for your business.

Because of the nature of native ads, they can be controversial. There are currently no rules or guidelines that dictate how publishers have to note or label native ads. Certain publishers are more transparent than others in how transparent they are with their audience in specifying what is sponsored content and what isn’t. Some advertisers believe it is unfair or unethical to “trick” readers with native ads. However, some say that native ads actually help audiences find products and content that is relevant to their interests.

Sometimes, people confuse native advertising with content marketing. So what’s the difference? Native ads are paid content that are placed on another company or publisher’s website. On the other hand, content marketing is content produced and published by a company to provide valuable insight to its audience. Native ads campaigns are not always the best advertising option for your target audience or to improve conversion rates.

Let’s take a look at some of the best examples of native advertising and see why publishers and advertisers sometimes choose this advertising option. This will help you get an idea of how to use and create the best native ads experience for your own company.

As you probably know, the Onion is a satirical website that also makes excellent use of branded content. The Onion created this article specifically for the client, H&R Block. Even though it is an ad, the article reads just like a typical Onion article. Though this example is slightly different than traditional examples of native advertising, it still qualifies. At the bottom of the article, it reiterates “Brought to you by H&R Block.” This is a great example of native advertising because it is fun, relatable, and entertaining. It increases brand awareness for the client, and still represents The Onion well. 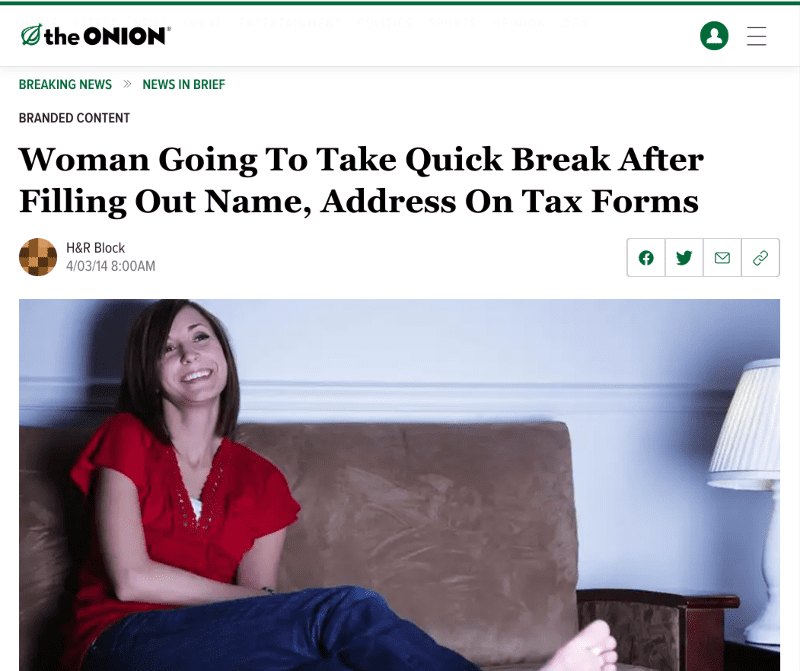 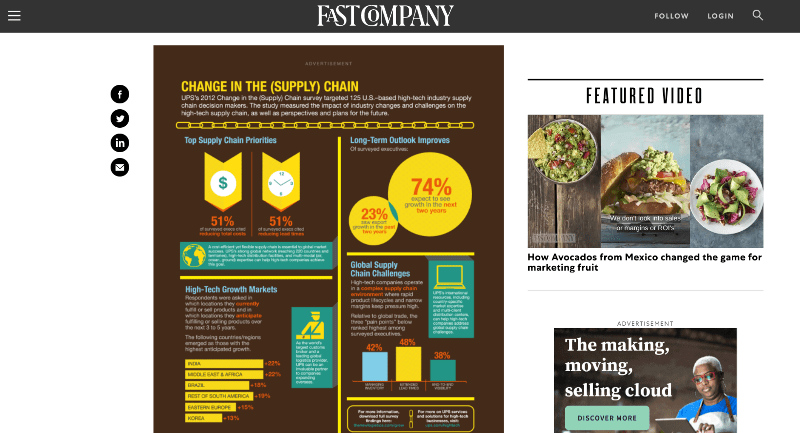 Buzzfeed is the sixth most popular news website, so who wouldn’t want their ads to appear on the site? Here’s a great example of native advertising from Buzzfeed, entitled “10 Quotes Every Grad Needs to Read.” It looks just like any other Buzzfeed listicle, right? However, the author of the article is “Buzzfeed User HarperCollins.” HarperCollins is one of the largest book publishers in the world.

There is also a box on the article noting that the post has not been vetted or endorsed by its staff. This is a good example of content marketing because it was published in late spring, during graduation season. It was also based on a viral commencement speech. Plus, as already noted, it looks just like typical Buzzfeed content. It’s effective, blends in, and timely, all elements of classic native advertising. 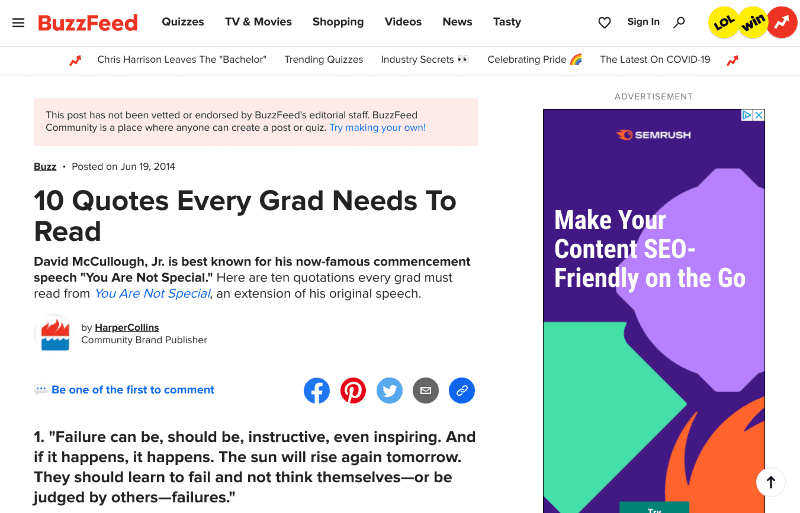 Choosing a native advertising platform depends on your target audience. Forbes has been running its BrandVoice marketing platform for a decade now. It remains an excellent example of how to use native content. The program and its native ad networks boast 343 partners and 316 million page views. The program is known for creating valuable content that resonates well with Forbes’ audience. Forbes also noted that the piece is branded content.

A recent example from the program is “Lasting Legacy: Key Strategies to Preserve Wealth,” which appears in the format of a Forbes long-read article but is actually an ad by BNY Mellon Wealth Management.

At first glance, you might not realize this article was an ad because it looks like a typical Vanity Fair feature. However, at the top, you’ll notice the “Sponsor Content” tag. This is a combined text and video feature about English race car driver Sir Malcolm Campbell, who was the first man to break the 300 miles per hour land speed record. Hennessy produced the video for its “Never Stop, Never Settle” campaign. Just like any other VF piece, the article is fun and interesting, which makes it an exceptional example of native advertising.

Now, let’s check out some of the worst examples of native advertising so you know what not to do for your own campaign.

The Atlantic displayed an ad/article in 2013 titled “David Miscavige Leads Scientology to Milestone Year.” Though the article was labeled “Sponsor Content,” many readers took issue with the promotional piece for what many believe is a cult. The Atlantic quickly pulled the article and issued an apology, though it is still considered a classic native advertising mistake.

Now that you know what to look for, you can probably spot both great and terrible native advertising examples next time you’re browsing the internet. Though many publishers have over time improved how they incorporate native advertising onto their websites, bad examples of native ads are still out there. 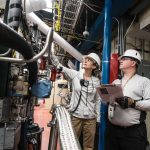 The Most Important Components of Manufacturing Marketing